Earth is currently experiencing a GEOMAGNETIC STORM! These occur when a sudden influx of plasma (a gas cloud of charged particles) enters Earth's magnetic field from outside, most often from solar activity (a coronal mass ejection aka CME, or an enhanced wind stream from a coronal hole). They can be mild, strong, or severe, depending upon how dense the plasma cloud is.

Okay, for those of you just tuning in, let's work on explaining some terms.

We are also sitting inside the atmosphere of the Sun, which is called the corona. Yes, we are, even at 93 million miles distant. It generates a wind, usually coming out from the Sun and spiraling away – yeah, the “solar wind.” Granted, the corona isn't very dense, but it's dense enough to create some effects, and we're working on using it to our benefit, like in solar sails and such, which can use the solar wind as much as light pressure (different topic) to maneuver around the Solar System like the spaceborne clipper ships of old.

But when the Sun gets... agitated, we'll say... the solar wind can get a lot denser. Coronal holes tend to move gradually from the poles down to lower latitudes, and the Sun's face develops an astronomical case of acne. This usually occurs around the time of solar maximum.

~The Weather Out There Is Frightful, Stephanie Osborn, ©2011

Now, a coronal hole is just a place in the magnetic field where the field lines stretch out to infinity, rather than looping back around, like the poles of a bar magnet. That means that the plasma can channel outward along those field lines, deep into the solar system. 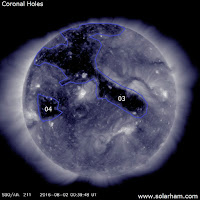 This is an image of the inner corona of the Sun, taken by the Solar Dynamics Observatory on August 2, 2016, at a wavelength of 211 Angstroms. The dark regions are the coronal holes, which show up nicely at this spectral region.

If Earth happens to run into one of these "enhanced solar wind streams," as they're called, if it's strong enough, it slams into our magnetic field like a bow wave from a ship. This compressed the magnetic field on the sunward side, and stretches out the "tail" on the anti-sunward side. If the tail is stretched enough, it can snap off, and "magnetic reconnection" occurs, when the field lines reattach closer in. But magnetic reattachment itself generates a HUGE surge of energy, which is fed back into Earth along our own poles.

So what are the effects of coronal hole winds and Coronal Mass Ejections (CMEs)?

They can actually raise the temperature of the outer layers of the Earth's atmosphere (the thermosphere, aptly named) sufficient to cause it to expand. This affects us, because that increases drag on satellites and spacecraft, and can cause the orbits of satellites to decay and re-enter well before they were intended...

Disruption of the Earth's magnetic field can be a problem. It can disrupt radio communication (including cell phones) rather severely. It can damage satellites that remain in orbit. It can generate “induced current” in any lengthy conductor...And it causes the aurorae. Most of you reading this have heard of the Northern Lights, properly termed the Aurora Borealis, but there are also the Southern Lights, the Aurora Australis. These are actually ovals that circle the magnetic poles of Earth (and most other planets with magnetic fields, by the way. They've been photographed on Jupiter.) They are where the charged particles that have been caught up from the solar wind or CME into the geomagnetic field follow the field lines down into the atmosphere. The gas molecules become excited into a higher energy state, then discharge that extra energy as light. This is very similar–in fact, essentially the same–as a fluorescent light bulb, only natural and not contained. The colors are determined mostly by the main gas that is fluorescing. Carbon dioxide produces white light; nitrogen, pink or red; oxygen, green or blue. (It can also generate ozone.)

~The Weather Out There Is Frightful, Stephanie Osborn, ©2011

So what we've got, space fans, is a big ol' coronal hole generating an enhanced solar wind stream, and the Earth ran smack into it. Currently the planetary K-index (a rough measure of the strength of the disturbance in the planetary mag field) is oscillating between 5 and 4, and at 5, we start geomagnetic storming. It's minor, so far, but it's there. So we are under an official NOAA GEOMAGNETIC STORM ALERT for MINOR GEOMAGNETIC STORMING.

This in turn means that there will be some heating of the upper atmosphere, and it can induce some currents in conductive materials near the poles. Communications may be affected in high latitudes, and migratory animals may briefly become confused.

But what it ALSO means is that we have an AURORA ALERT for high latitudes! Now, NOAA doesn't put out aurora alerts. But I do! My followers on Facebook know that whenever conditions are right, I issue an aurora alert, and give a heads-up to the regions who can reasonably expect to see one. This is not a guarantee that you WILL, only that the probability is GOOD. Therefore --

Keep an eye to the skies tonight! You just might see an aurora!

Posted by Stephanie Osborn at 3:40 PM No comments: Links to this post