I'd like to introduce another author with Twilight Times Books, Scott Eder. Today we're bombing his new book, Knight of Flame! Please go have a look at it, and buy it! It's even on sale! 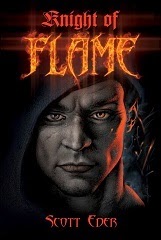 Hello. My name is Scott, and I write Urban Fantasy. Wait, no, that's what I did a few weeks ago, before the revelation, before DragonCon.  Today, in my post-DC era, I write Contemporary Fantasy. And the funny thing is that I haven't changed a thing. I still write the same novels, but my genre perception has shifted thanks to the wisdom presented at Dragon*Con.

I've heard the advice not to worry about genre. Let an agent or editor figure out into which Fantasy subgenre the book should fall since the writer is not typically the best judge. That's all well and good after the fact, once the book is sold and the decisions on how to market it are made. What about when a writer is discussing his work with publishing professionals or other authors?

But, Scott, say it ain't so. I wish I could. I feel kinda silly about it, actually. Thank goodness I came to the realization myself instead of having someone have to point it out to me. I don't claim to know a lot about this industry into which I'm trying hard to break. In fact, I know fairly little.  That's why I keep asking questions, hanging with those who do know about this crazy business, and attending different cons and seminars. Look out World Fantasy, you're next.

I got my first inkling of my genre faux pas early on. I'd been trying to identify my niche, my stand-out factor. What made my Urban Fantasy novel unique? I realized that one of the differences is POV. My novel has multiple POVs. I haven't seen that much in UF. Most UF stories turn upon the axis of a single driving character—typically a badass detective or bounty hunter protecting their slice of the world from the nefarious creatures of the night.

I was good with the multiple POV thing. I started talking that up and building my case on how my book differed from the others. That went well until I started asking questions of NYT bestselling UF authors about it and got some strange looks. Perhaps there's a reason there isn't much multiple POV in UF.

It seems that the general consensus about UF is that the pacing is very fast. That single POV ass-kicker drives through the story at a very fast pace. The characters don't typically amble about smelling the flowers. They find and fight the baddies threatening their town. The tone is dark and gritty, like the dirty streets and water of the cityscape in which they prowl. UF is the noire of the Fantasy genre.

And that's where it all went crazy. Yeah, I see the dark and the grit and the detective aspect of UF stories. Mine decidedly did not have those elements. I realized the only things my novel and UF had in common was that it occurred in a city (for a little while) and brought magical elements into a real-world setting.

Sorry, but that's just not enough. So, Knight of Flame is not Urban Fantasy. It's Contemporary or Modern Fantasy. It doesn't have the grit and dark tones of a Faith Hunter, Jim Butcher, or Kim Harrison novel. It's more like the sense of wonder and camaraderie of the Companions of the Hall from R.A. Salvatore's Forgotten Realms books. I loved the interplay between Drizzt, King Bruenor, Wulfgar, Regis, and Cattie-brie. They fed off each other while they saved the world from utter destruction time and again. I wanted to make sure that my characters had that type of relationship and wrote that in from the beginning. Duh. I should have realized.

The book held true to genre, but the writer got lost somewhere along the way.

That's not the only place I got lost. This being my first trip to Dragon*Con, I spent a fair amount of time wandering the floors of the Hyatt and the Marriott. When I did find the right room at the right time, I learned, and I'll be passing some of those other lessons on [in his blog --Steph] in the coming weeks.  Stay tuned.

See? Even us authors are learning all the time.

Posted by Stephanie Osborn at 3:30 AM No comments: Links to this post