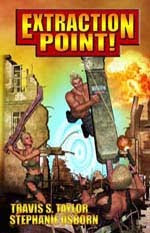 Ray wasn't quite sure where the music was coming from, but it was loud. The second time he managed to force his head above the murky brown and gray water in the hubcap-deep tire buster of a pothole, he could hear the music pounding even louder than his heart AND the pouring rain–which was saying something. It was a remake of the old Guns 'n' Roses tune Perfect Crime–and from what he could tell, IT ROCKED.

The rain and the music and a chance to catch his breath gave him a quick burst of adrenaline to fight against the force of the two knees in his back, the hand grasping tight at the nape of his neck, and the fist beating into his left ribs. Ray flinched from the repeated jabs of pain pummeling into his side and could feel the adrenaline--and his hold above the water--slipping. So he took a deep gulp of air just before his face was slammed forward into the puddle, his nose bashing hard against the gravelly, broken asphalt at the bottom. The automatic gasp of pain that came next was inevitable. So was the water that filled his mouth.

Instinct engaged, and his body thrashed in wild desperation as he fought to avoid inhaling the filthy water. Despite his best efforts, he began choking, which in turn brought on a cough/gag reflex. Drowning, he realized, triggered bodily responses that were not only hardwired, but damn difficult to overcome.

I'm getting my ass kicked, he thought, verging on panicky despite himself. I've got to do something! Something Goddamned quick!

Using every ounce of willpower he possessed, Ray let his strength go and relaxed so that the man on his back could force him down and therefore be baited into a false sense of dominance–even, maybe, the notion that Ray was dead. Then he gritted his teeth and threw his right elbow up with all the strength he had left.

"Get OFF me!!" he yelled, muddy water gurgling from his lips as his elbow hit something hard–just when he lost his balance with his left hand, causing him to slip full face forward into the murky pothole… again. But the grip around his neck was gone.

Maneuvering both of his hands under himself push-up style, Ray managed to roll his body to the right, forcing his attacker off his back while continuing his roll over and then flipping backwards onto his feet. Ray shook the rain, mud, and blood out of his eyes, hacked slimy water from his windpipe, and made ready for an attack, but soon realized that his elbow had caught the man that he had been fighting square on the nose. The man was standing, briefly stunned and temporarily blinded, with bright red blood mixed with rain pouring profusely down his face. This gave Ray only long enough to catch his breath and scan the area for his handgun. He didn't see it anywhere. Shit. I liked that gun. Ok, hand to hand it's gonna be then, he thought to himself, easing into a shallow horse stance while really wishing he hadn't let the guy get the drop on him and knock his pistol out of his grip earlier.

Extraction Point! is available for purchase through Barnes-Noble and Amazon, as well as Twilight Times Books.