Excerpted from Kiss Your Ash Goodbye: The Yellowstone Supervolcano, © 2018
By Stephanie Osborn
http://www.stephanie-osborn.com
Images in this article are public domain unless otherwise noted.

What Would Happen If Yellowstone Erupted Today?

A hydrothermal or phreatic eruption is by far the most common occurrence at Yellowstone. Put simply, it’s a cross between a boiler explosion and a geyser, and at least at Yellowstone, often leaves new geysers or hot springs in its wake. The USGS’s definition is as follows: “[A hydrothermal eruption is an] explosion that can occur when hot water within a volcano’s hydrothermal (hot water) system flashes to steam, breaking rocks and throwing them into the air.” And often throwing them a good distance...though NOT nearly as far as a standard volcanic eruption can chuck a lava bomb.
It does happen, and has happened in living memory — Porkchop Geyser in the Norris Geyser Basin was formed in this fashion in 1989. More historically, Excelsior Geyser generated a large, violent hydrothermal eruption in 1888, which was captured on film; it had been erupting in this fashion off and on through the 1880s-90s. Duck Lake, the ENTIRE LAKE, is the crater formed by such a hydrothermal eruption. 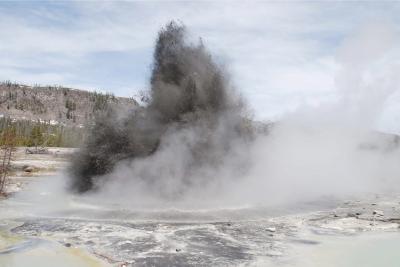 IMPORTANT NOTE: Even when not in an active eruption, Yellowstone’s hydrothermal features are dangerous; some 22 people have died from falling into scalding hot springs since records began in 1870. One of the most recent, which occurred in 2016 in or in the near vicinity of Porkchop, resulted in the partial dissolution of the body before it could be recovered, thanks to the fact that the spring was essentially boiling acid; park rangers said had it taken much longer to recover the body, there would have been no body left to recover. (What was the victim going to do, according to his sister, who saw the whole horrible thing? He was going to take a hot tub bath in it. He fell in while trying to take the temperature of the water, when the thin, fragile mineral deposit on which he stood gave way.)

Yellowstone is far from the only volcano which generates such eruptions; I have been present for numerous such eruptions at Mount Saint Helens. There, they are usually called phreatic eruptions, and may carry some ash along with the steam vents. They are fairly common occurrences, and take place anywhere there is snow, ice, or other groundwater source in close proximity to magma.
Hydrothermal eruptions at Yellowstone are localized to the vicinity of the explosion, and do not affect the park as a whole. They can present a danger to bystanders, however, if observers are in the way of either the large rock ejecta or the scalding and often highly acidic water/steam.

This is THE MOST LIKELY TYPE OF ERUPTION to occur at Yellowstone.

The last “ordinary” eruption to occur at the Yellowstone hotspot happened only 70,000 years ago — yesterday, geologically-speaking. These tend to form fairly common lava flows, and may be somewhat eruptive (though trap-type flows have also occurred, according to geological evidence). It would devastate the park, and possibly some of the surrounding land, depending on exactly where and how the lava surfaced, but would not necessarily induce a supervolcanic eruption if there is insufficient pressure, or if the “surface shadow” of the underground melt is not large.
This is the second most likely type of eruption to occur at Yellowstone. 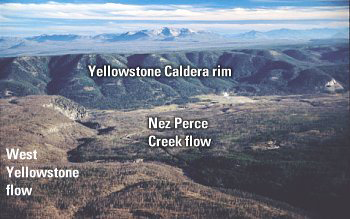 Super-eruptions take a fairly long time to develop, but as they progress, they accelerate. It can take anywhere from millennia to mere decades for the magma chamber to inflate and the signs to manifest, but once the chamber roof cracks all the way through from the surface, the rest takes place in a matter of minutes to seconds.

Once the cap has broken up, a giant plume develops some 12-20mi (20-32km) high. The initial plume collapses to form a giant pyroclastic flow that wipes everything out within 60-100mi (100-160km). Anything closer than 125-200 mi (200-325 km) is buried under vast amounts of ash and roofed/covered structures collapse within hours to days; aircraft can no longer fly over western USA/Canada, rapidly progressing to all of North America as the ash cloud spreads. Vehicles stall when air intakes choke on ash. Mud flows form in rainy areas. The first cases of silicosis develop.  The ash cloud sweeps worldwide, reaching Europe in ~3 days. Global temperatures drop, and Earth enters a volcanic winter.

Modeled Extent of Ashfall in a Modern Super-eruption

Even Chicago would get up to an inch or more of ash, and the East Coast gets a solid dusting. The west coast of USA, Canada, and northern Mexico get no favors, either. The grain belt would be devastated in a matter of hours.

Some FEMA researchers estimate the US could take as much as $3 trillion in damage/loss. Other experts say that as much as 2/3 of the USA could be rendered uninhabitable. The modeled extent of ashfall,
with depth decreasing with increasing distance,
of a modern-day Yellowstone supereruption.
Credit: USGS.

A supereruption is the LEAST likely type of eruption to occur. There are far too many panic-mongers out there.

While I was writing the ebook, I was pinged on social media about A DREADFUL SITUATION! OH NOES! HUGE FISSURE OPENS UP INSIDE YELLOWSTONE SUPERVOLCANO, AREA AROUND FISSURE CLOSED! ERUPTION IMMINENT!!! or impressions to that effect.
Well, I took one good look at the article’s source and snorted. And then I got busy researching.
It turns out there was a JOINT FRACTURE in the rock above Hidden Falls in GRAND TETON NATIONAL PARK, NOT Yellowstone National Park, and some SIXTY MILES (100km) from Yellowstone. The crack was HORIZONTAL (not vertical, therefore NOT able to reach down toward a magma chamber, which does not currently have sufficient melt in it to even inflate, anyway), and was considered a rock fall hazard, hence the real reason why the immediate area was closed by the Park Service. Cause of the fracture was most likely the usual freezing/thawing process that causes such things in mountain ranges. 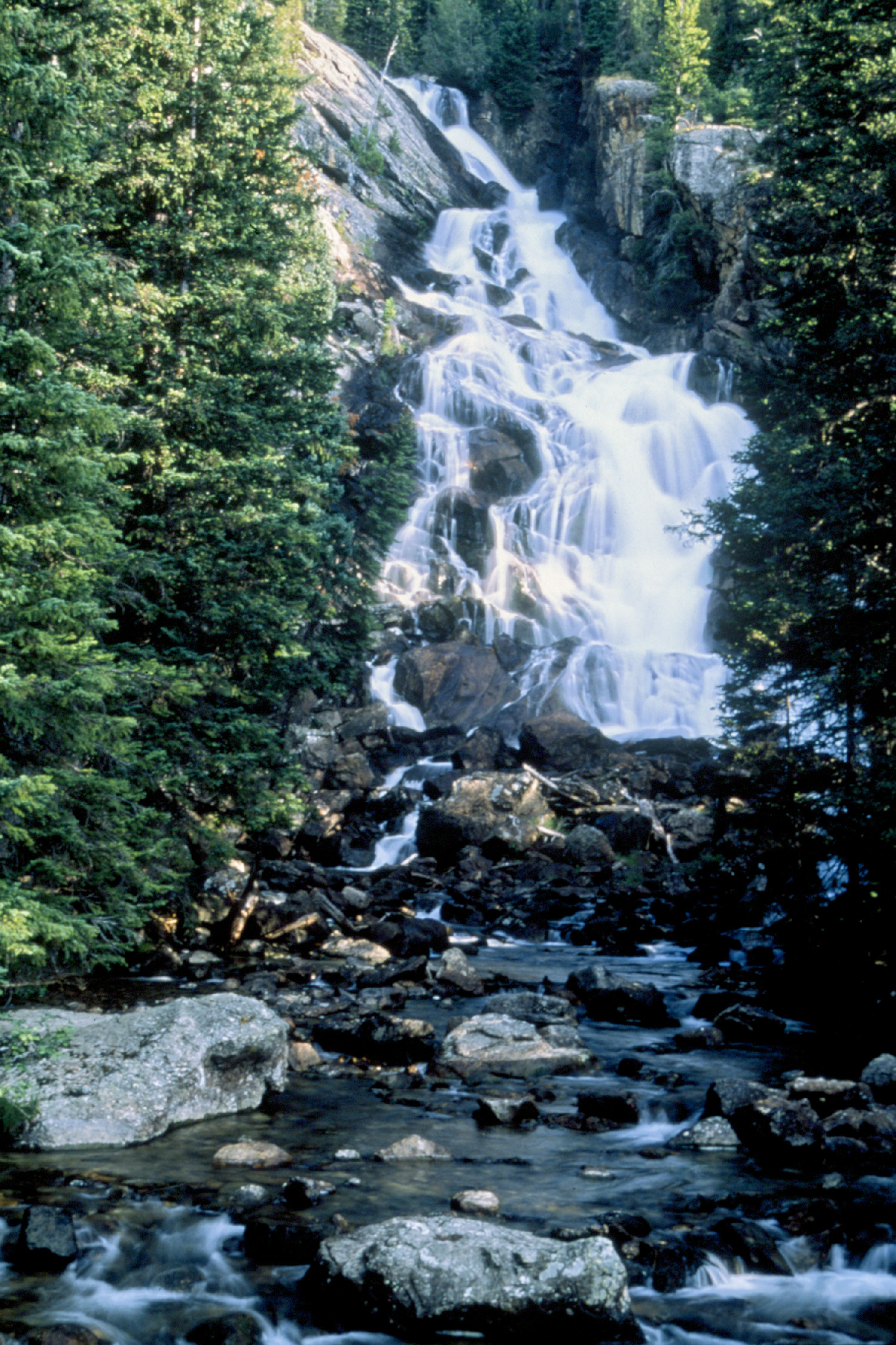 In 2004, there was a small kill-off of animals in Yellowstone, notably about half a dozen bison, in a hollow along the Gibbon River inside the park. This, as well as the slight inflation of the Yellowstone Lake bed, resulted in significant concern among both geologists and the public that the magma chamber was inflating and the caldera becoming active.

However, that proved not quite the case.

You see, the caldera area “breathes.” Elevations go up and down by small amounts. Sometimes this is because the magma chamber is inflating, and sometimes it isn’t. In this case, the DEEP chamber (NOT the shallow chamber, from whence an eruption comes) had in fact had fresh magma pumped in, but the quantity was small, and it periodically slows, stops, or even reverses. Scientists believe this is because the “fresh” magma, upon reaching the bottom of the upper chamber, then flows away through deep horizontal vents (rather like what Kilauea is doing now), to cool and form plutons — small to very large bodies of underground, intruded, solidified igneous rock.

Often this ground swell is also because there is a tremendous quantity of ground water heated by the (mostly-solid but still hot) upper magma chamber. And when water is heated, it expands. As the heated ground water ebbs and flows, the ground in the area swells and shrinks. This, in turn, tends to change the activity of the hydrothermal features, increasing or decreasing with the pressure of ground water.

That last bit is important, because the animal-kill event occurred shortly after a cold front passage, when the air was frigid and still, and the animals took shelter in a low-lying area near the river, where those same hydrothermal features would help keep the air warm, and make foraging for food easier. Hydrothermal features such as those found nearby are also known to emit toxic volcanic gases such as sulfur dioxide, hydrogen sulfide, and carbon dioxide, often in significant quantities, WITHOUT the need for an eruptive event — pretty much continuously. And these gases, mostly being heavier than air, tend to flow along the ground and collect in low-lying areas. Normally, the winds in the region keep the air sufficiently stirred that concentration is not particularly dangerous, but certain meteorological conditions — such as those brought about by the cold front passage — can result in air that is sufficiently still to allow the vapors to collect and concentrate, and this appears to be what happened in 2004.

And this has happened before, several times in recorded history. This does NOT mean that the caldera is preparing to erupt. Nor does it mean that such an eruption, IF it took place, would automatically be a supereruption, as “ordinary” eruptions are more common, based on geologic studies.

But What if it DID erupt?

What do you do?

No, seriously. What do you do?

In all seriousness? Unfortunately, there are some natural disasters for which it simply isn’t possible to do a lot of advance preparation. They are simply too big, too widespread, and too variable, to make plans. Supervolcano eruptions are one of these. Physicist Michio Kaku said it best, I think...

“All you can do is run.”
~Michio Kaku

To obtain a copy of Kiss Your Ash Goodbye: The Yellowstone Supervolcano by Stephanie Osborn, go to: bit.ly/Kin-KYAGTYSV.

Posted by Stephanie Osborn at 3:00 AM No comments: Links to this post