This is the continuation of the discussion about the Higgs boson by my friend Dr. James K. Woosley, who is one of my scientific advisors and one of my beta readers. This is some of the science that he and I tossed about in order for me to write the Displaced Detective books, as well as Extraction Point! with Travis S. Taylor. It's about to get a little deep, so put your thinking caps on tight!


The next step to understanding the Higgs boson is to explore the other elements of the Standard Model of elementary particle physics, to provide the necessary context.


The story of the development of the standard model is pretty much the history of twentieth century physics. The story actually begins a few years early, in 1896, when the British physicist J. J. Thompson discovered that the "cathode rays" which had been observed over the previous twenty years in gas discharge tubes were actually individual particles (corpuscles), which eventually came to be called electrons. These particles were shown to have a negative electric charge — meaning they moved in the direction of increasing electric voltage — and to have a mass less than 1/1000th of a hydrogen atom.


Then in 1912, Ernest Rutherford discovered the atomic nucleus, which when stripped of electrons was shown to have a positive electric charge, and by 1917 realized that the lightest atomic nucleus, that of hydrogen, appeared to be an indivisible, positively charged particle which came to be called the proton. The problem of more massive atomic nuclei was solved in 1932, when James Chadwick isolated the electrically neutral neutron as the particle which contributed
to nuclear mass without affecting nuclear electric charge. Wolfgang Pauli had earlier postulated the neutrino to explain the slight loss of energy associated with nuclear beta decay (the neutrino was not discovered as an actual particle until 1956), which led to the identification of the beta decay mechanism,

Note the bar over the Greek letter  (nu) representing the neutrino. In the late 1920's, British physicist Paul Dirac had developed a complete quantum theory for the electron which introduced the possibility — indeed, the necessity, of antiparticles, particles which possessed electrical charges of the same magnitude but opposite polarity as their partner particles and which reacted with them to decompose into hard radiation.
Dirac's prediction was cemented by the discovery of the anti-electron (positron) by Carl Anderson in 1932, the discovery of the anti-proton (very rarely called the negatron) in 1955 by Emilio Segrè and Owen Chamberlain, and the discovery of the anti-neutron (at which point nobody bothered to give it its own name) in 1956 by Bruce Cork. The anti-neutron was particularly puzzling, because the neutron is electrically neutral, but the anti-neutron was discovered to have the opposite magnetic polarity of the neutron. Also, since the anti-neutron decays into an anti-proton, a positron, and a neutrino, the convention was developed that an anti-neutrino (hence the bar in the equation above) is associated with the electron. Together, the electron and the neutrino are called leptons, and a quantity called "lepton number" as assigned so that the net change in lepton number in a beta decay is zero. Hence, the electron and the neutrino (emitted with the positron) have lepton number +1, and the positrion and the anti-neutrino (emitted with the electron) have lepton number -1.
It should be noted that all four of these particles have one-half unit of spin1 (which can be measured relative to the direction of the motion of the particle, and is aligned either in the direction of, or opposing the direction of, motion). This means that, when collected together, they observe the so-called Fermi-Dirac statistics which grew out of Dirac's theory of the electron (designed to account for spin). For practical purposes, these particles, call fermions, resist being packed tightly together. Conversely, particle with integral values of spin (0, 1, …) can be packed to high density. These are called bosons, being based on Bose-Einstein statistics.2
This nice, cozy picture of four fundamental particles, together with their anti-particles, was shattered before it was even fully formed with the discovery of additional particles, starting with the muon, which behaves like an electron, in 1936, and of two classes of particles: a class of bosons (the mesons) and a class of fermions (the baryons, which included the neutron and the proton), beginning in 1947.3 This increasingly crowded "particle zoo" was brought to a semblance of sanity beginning in 1964, when Murray Gell-Mann and George Zweig postulated that the then-known mesons and baryons were made up of three types of smaller particles called quarks. A fourth type of quark was discovered in 1974, and an additional pair of quarks have been confirmed in more recent experiments. A third electron-like particle, the tauon, and neutrinos corresponding to the muon and tauon, have also been identified. This picture of three generations of quarks and leptons is summarized in the table below.

In this picture, the mesons are found to be made of pairs of quarks and anti-quarks; while the baryons are composed of three quarks. These compositions obey mathematical rules which look very much like the much more comprehensible concept of spin, which results in beautifully symmetric structures. In the graphics on the left below4, chart (a) shows the composition of scalar mesons (quark and anti-quark with opposing spins that cancel to zero net spin) composed of the up, down, strange, and charm quark, while chart (b) shows the corresponding vector (aligned spins adding to one unit of spin) mesons. The central octets represent the particles known at the time the quark theory was formed. The graphic on the right5 shows the basic spin one-half baryons (two quarks with aligned spin, one with opposing spin) on the bottom octet, and then the structure as one, two, or three bottom baryons replace the lighter quarks (a similar structure has been defined with charm quarks, and additional combinations with both charm and bottom mesons have also been discovered). 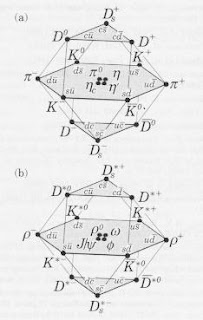 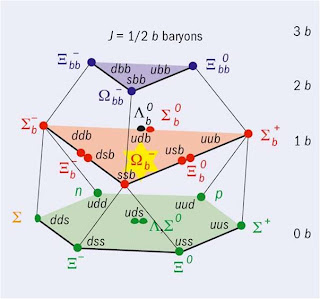 The quarks have been found to be very tightly bound together; although there have been a few tantalizing hints, there is no firm evidence that quarks exist as free particles outside of the elementary particles which are composed of them. Similarly, there have been hints, but no confirmation, of more complicated particles, such as meson-like particles composed of two quarks and two antiquarks, or hybrid meson-baryons with four quarks and one anti-quark. The significance and/or rarity of such events remains a subject of study.
The most notable difference between the three generations is the mass of the particles. This is illustrated graphically below, where the mass of the three generations of particles, excluding the neutrinos (which are now known to have mass but are very light), is given in the conventional units of high energy physics, MeV/c2.6 As can be seen, the mass of particles increases more or less exponentially between generations. This is far from fully understood. 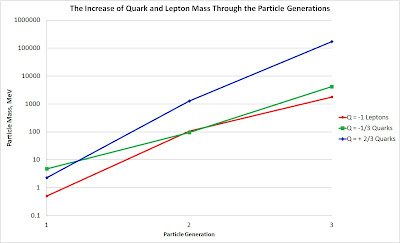 1 "Spin" is a quantum property of elementary particles which behaves mathematically in many ways like spin in ordinary life, from an ice skater twirling to the Earth's rotation about its axis. However, as a quantum property, it only occurs in discrete values: 0, 1/2, 1, 3/2, 2, etc. However, while spin at the quantum level behaves like spin in real life, we cannot directly observe elementary particles to see if they are really spinning, or if something else is happening that we can't observe. When particles with spin combine to form composite particles, the spins can be aligned with or against each other; the particles can also have quantized (values of 0, 1, 2, etc.) orbital angular momentum from their orbits around each other. This is not the most confusing thing about elementary particles.


2 Satyendra Nath Bose was an Indian physics professor who developed his theory of boson behavior in 1924 and sent it to Einstein, who was so impressed he translated it into German himself and submitted it for publication.

3 For the sake of simplifying the discussion, I will not discuss the confusion of meson and baryon physics in the 1950's, as almost a hundred different particles were discovered and quantified, and the muon was not yet fully distinguished from the true mesons.

6 One MeV is the kinetic energy of a charged particle which has accelerated through a volatage of one million volts, about the scale of most lightning generators found in high school physics labs. The effective accelerating voltage of a facility such as the Large Hadron Collider at CERN is about 10 million MeV. The division by c2 is reflective of Einstein's equivalence of energy and mass.
~~~

The next installment next week!
-Stephanie Osborn
http://www.stephanie-osborn.com
Posted by Stephanie Osborn at 3:30 AM No comments: Links to this post