Lisa Collins is an online friend of mine, a lady after my own heart for her interest in several sciences. So when she put out a request to guest blog for her latest release, The House Bast Made, I said, "Sure!" despite the fact that my blog has been inactive for several months. (Hopefully this will change in future; it seems that the various social media have not followed through on the intended charges for "advertising.") So here she is, to tell you a little about herself.

Archaeology and Me
by Lisa M. Collins

I have a deep and abiding love for all things ancient Egyptian. When I was little, I found an old, worn book about the country, which I still have to this day. Imagine me out in the backyard doing excavations trying to find bits and bobs of interest. In my mind, I was a great archaeologist. As time moved on, other subjects took the place of archaeology in my heart. By the time I graduated college, I considered myself a historian. What most people don’t understand about degrees in the humanities is that you must be able to communicate in written form. Without words how would the world have learned from Plato, Aristotle, the Prophets, Bertrand Russell, or Martin Luther King, Jr?

The written word is what accurately preserves ideas, leading to thought, and then to action. This drives me to present my words, thoughts, and ideas in writing. I studied not only the masters like Shakespeare, Tolstoy, Hemingway, Austen, Woolf, Mark Twain, Frederick Douglass, and Maya Angelou, but also speech writers for the White House and newspapers. Any time I find a writer who draws me into their story, I study how they accomplished the goal. 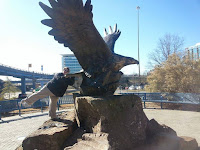 My desire to write starts off with a sad tale and a dash of memory. In 2008 the company I worked for downsized and I was one of the many who were let go. I had a small severance package so I didn’t immediately have to hit the byways looking for work. There I was, looking for what to do next and I was reminded of how, when I was little, I would tell stories to entertain my friends. To figure out how to begin writing my imaginings down for others I went to the wisest ‘person’ I know—that’s right, Dr. Google! I came across NaNoWriMo, or National Novel Writing Month. Being a total fiction n00b, I decided to take up the challenge and write 50,000 words in the month of November. Believe it or not, right out of the gate, I did it!

Later I got a job working for the State of Arkansas, but the itch to write never fell into the background. I kept dabbling and learning from others. Eventually, I had several things published in non-fiction venues, such as the state newspaper and journals, but passion was to write fiction. One thing you need to know about me is that I love goal setting and lists, so I set a goal of producing one new short story a month, and a secondary goal to find publishers who would print my work. As any of you out there in publishing already know, I got my fair share of rejection letters. My very first one hangs on the wall by my desk.

Rejection is hard, but I didn’t let that hold me back. I went back to the drawing board. Read books on craft. Read novels like I wanted to write. The day finally arrived in early 2013 when my first science fiction short story, The Tree of Life, was accepted into an anthology! I was over the moon! Rejections, however, still happen. I have come to the realization they are part and parcel of the writing life. Each one I receive proves to me I’m not standing still, I’m working, and I will prevail. Also in the last five to ten years a new way of presenting work to the public has exploded into the mainstream. Indie publishing. Now writers have the opportunity to showcase work directly to readers without a go-between. Some writers do all their work independently, others only work with publishers, but I find myself in between these two. I am both traditionally published and indie published. I love the freedom to chart my own course.

When I was writing my latest novella, The House Bast Made, I got to put my archaeology hat back on. It felt good, like I was revisiting an old friend…you know, the kind that gets you into trouble, but you love every moment. This book was such fun to write. I knew the setting in Egypt’s Valley of the Kings was going to be perfect for some fantastical paranormal fun. Our archaeologist, Reid Cannon, comes to the realization—myths need not be fairy tales. Reid and his friends get embroiled in a war between gods and goddesses that has raged for eons. Reid and his crew must come together to save a friend from the brink of death and the world from utter chaos. My hope is that you will enjoy your time in the Valley of the Kings and join us next time when Reid Cannon travels to South America!

Sign up to get the latest info on book launches and special newsletter only promotions!
http://wordpress.us2.list-manage.com/subscribe?u=278e3f25f955d9e98afa61a9e&id=05f57a9e09

Lisa M. Collins has always been interested in Outer Space, Adventure stories, and Southern culture. She was born in Dixie and has always lived south of the Mason Dixon Line. She graduated from the University of Arkansas with a bachelor’s degree in history with specializations in American and Russian history. Lisa lives in central Arkansas with her husband and an adorable cat, Baby Girl, who believes she is Lisa’s co-author. Lisa has one adult son who is married to his high school sweetheart.