Yesterday I spent the afternoon and evening near Birmingham, AL, celebrating the birthday of a child of friends. I had not seen the news at all until I arrived at home well after dark and discovered the news that one of my heroes had crossed the threshold into Eternity.

Today I have spent much of the day pondering over what I was going to say about it. For I had to say SOMETHING about it; the passing of the first human to set foot on another celestial body is not something that should be ignored. How much the less, then, by someone like me, who saw, was inspired, worked with, became friends with, other astronauts. No, I could not let this go by.

But what to say? The depth of feeling is, despite my reputation as a decent wordsmith, beyond my humble ability. Then it occurred to me that one already had. And so I present to you the words of a WWII pilot, born of American and English, one who knew the thrill as test pilot Armstrong did, but died far too young. You see, at the same time period as Armstrong and the other Apollo astronauts were making their daring voyages, I clearly recall that every Sunday afternoon (and it is appropriate that it is Sunday afternoon when I write this), what would now be termed a "music video" was played as part of programming. The video contained footage of some of the latest fighter jets, and the voice-over was the now-famous poem by that young WWII pilot, John Gillespie Magee, Jr. - High Flight. 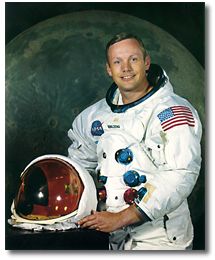 "High Flight" Oh! I have slipped the surly bonds of Earth
And danced the skies on laughter-silvered wings;
Sunward I’ve climbed, and joined the tumbling mirth
of sun-split clouds, — and done a hundred things
You have not dreamed of — wheeled and soared and swung
High in the sunlit silence. Hov’ring there,
I’ve chased the shouting wind along, and flung
My eager craft through footless halls of air....

Up, up the long, delirious, burning blue
I’ve topped the wind-swept heights with easy grace.
Where never lark, or even eagle flew —
And, while with silent, lifting mind I've trod
The high untrespassed sanctity of space,
— Put out my hand, and touched the face of God.
Posted by Stephanie Osborn at 6:42 PM 4 comments: Links to this post