Excerpted from Kiss Your Ash Goodbye: The Yellowstone Supervolcano, © 2018
By Stephanie Osborn
http://www.stephanie-osborn.com
Images in this article are public domain unless otherwise noted.

There have been 3 known “Yellowstone” eruptions with detectable welded-ash (which forms a rock called “tuff”) strata, all of which occurred in approximately the same location:
1) Island Park/Huckleberry Ridge
2) Henry’s Fork/Mesa Falls
3) Yellowstone/Lava Creek 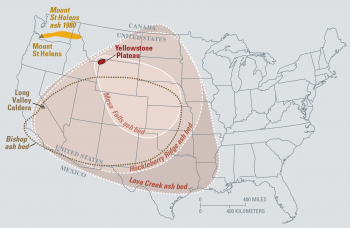 A map depicting the ash bed strata for all three major Yellowstone supereruptions,
along with the Long Valley eruption’s Bishop ash bed,
and the Mt. St. Helens ash fall, for comparison.
Credit: USGS.

The Huckleberry Ridge Eruption is the oldest eruption at the current location, some 2.1 million years ago. The caldera formed by this eruption is known as the Island Park Caldera; the stratum of tuff (also “tufa”; a kind of rock composed of welded ash — upon landing, the ash was still hot enough to be partly molten, and the particles literally stuck together, or “welded,” into a single rock layer; it is often porous, fine-grained, but may contain larger, pebble-like particles, especially close to the eruptive source) is the Huckleberry Ridge Tuff. 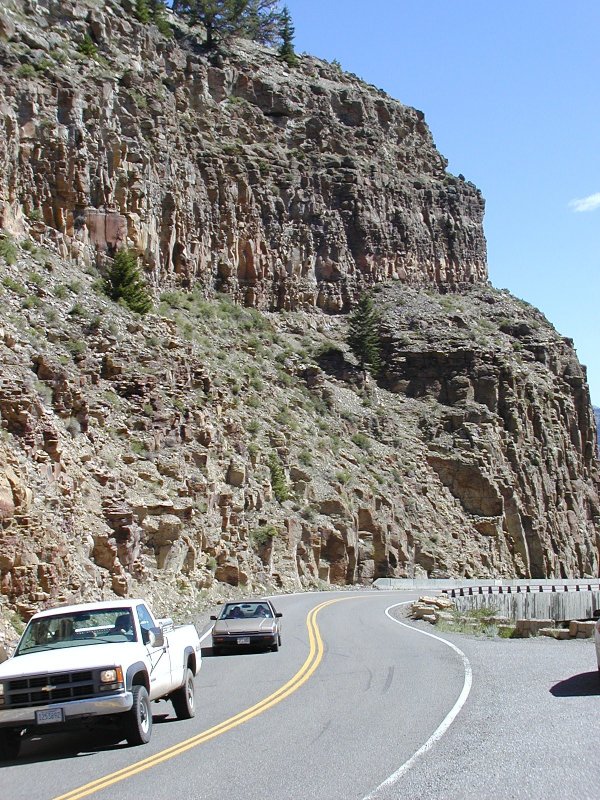 The Mesa Falls eruption occurred 1.3 million years ago and produced the Henry’s Fork caldera along with the Mesa Falls Tuff. The Henry’s Fork megacaldera is approximately 18x23mi (11x14km) in dimension, though some argue for a rounder shape, anywhere from 10-20mi (16-32km) in diameter.
This was “only” a VEI 7 eruption, but partly due to its density, and partly its overall size, it is considered a supervolcano eruption. 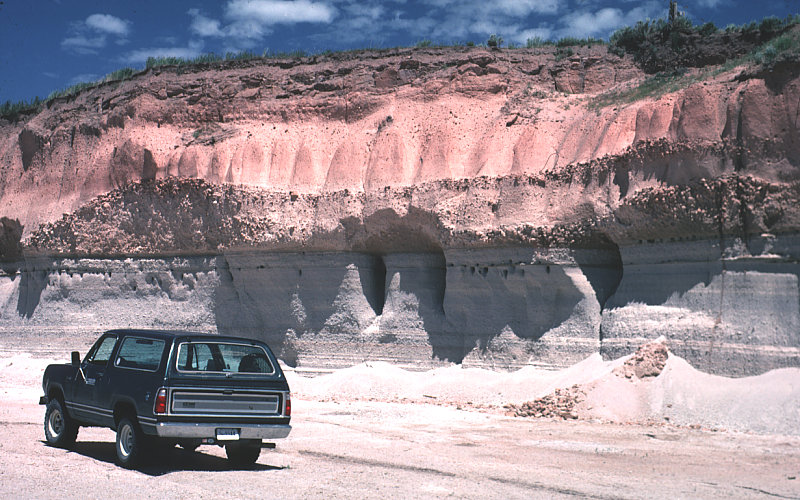 This eruption is the most recent supereruption, and the only one dubbed “Yellowstone”; it occurred “only” ~630,000-640,000 years ago and produced the current Yellowstone caldera, creating the Lava Creek Tuff formation. The current caldera measures 53x28mi (85x45km). The current caldera rim ranges from some 100ft (30m) tall up to nearly a third of a mile (500m) high. This was without doubt a VEI 8 eruption. 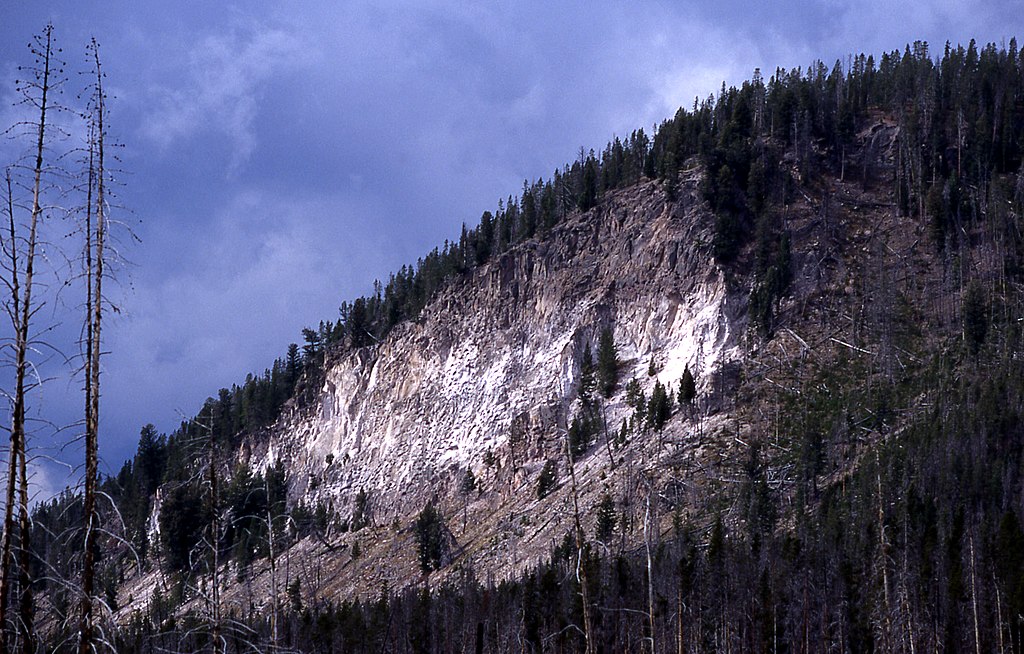 
NOTE: It is essential to realize that the maps depict THE EXTENT OF THE TUFF STRATUM FOR EACH ERUPTION, and do NOT indicate the full extent of the ASH FALL. As aforementioned, tuff is formed when the falling ash is still hot enough to be partly molten, so the particles stick together when they contact. Ash can and does fall far beyond the extent of the formation of tuff — the ash plume from a Yellowstone super-eruption would be caught up in the jet streams and swept worldwide.

So. Three honkin’ big eruptions from the Yellowstone hotspot, huh? Well, really, that’s not a huge record. There’s not that much to worry about, is there?

Except for the fact that the Yellowstone hotspot has been busy. And it’s been around for MILLIONS of years.

Yellowstone hotspot eruptions can be tracked from their current location in the corner where Wyoming, Montana, & Idaho meet, all the way back in a southwest direction nearly to the northeast corner of California — as many as a dozen or more! The oldest known eruption dates to at least 16-18 million years ago. 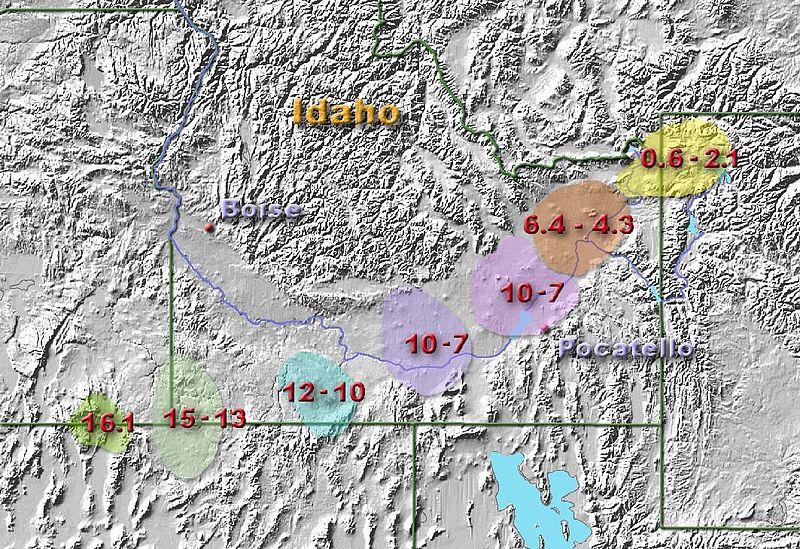 Location of some of the previous Yellowstone-hotspot calderas, with ages indicated.
Credit: Kelvin Case at English Wikipedia, CC BY 3.0,
https://commons.wikimedia.org/w/index.php?curid=29981303 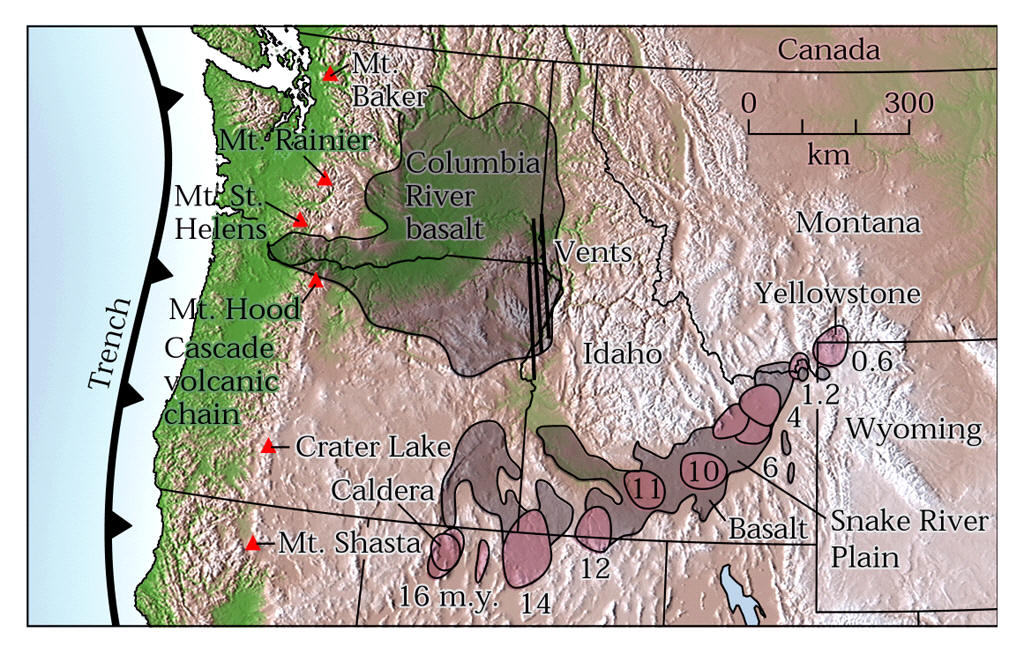 A different version of the map, showing other areal features,
including a few members of the Cascade volcanic chain,
and the Columbia Flood Basalts, a trap eruption which may or
may not be associated with the hotspot.
Credit: Lori Snyder, Department of Geology, University of Wisconsin-Eau Claire, via USGS
https://people.uwec.edu/jolhm/eh2/erickson/history.html

Also realize that the Rocky Mountains orogeny (mountain-building) ended some 55 million years ago, meaning they were already formed before the Yellowstone hotspot got to them...yet, aside from some resurgent domes, etc., there are essentially NO mountains in the hotspot track — at least within the megacalderas.

The mantle plume/hotspot is NOT moving relative to the Earth’s surface overall, nor with respect to the Earth’s core. Plate tectonics creates the appearance that it is moving, when it is really the North American plate moving across the hotspot. The track of past calderas punched through the plate is therefore an inverse record of the direction of movement of the North American plate. The North American Plate is moving roughly southwest to west-southwest, with slight changes in direction over time. This accounts for the direction and slight curvature of the caldera track.

To obtain a copy of Kiss Your Ash Goodbye: The Yellowstone Supervolcano by Stephanie Osborn, go to: http://bit.ly/Kin-KYAGTYSV.

Posted by Stephanie Osborn at 3:00 AM No comments: Links to this post