Excerpt: The Case of the Displaced Detective:The Arrival 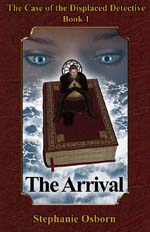 A tall, dark figure, clad in formal Victorian eveningwear, strode briskly down the shadowed street, casually swinging his silver-embellished walking stick. No carriages had passed in the last half-hour, and only one hansom cab had wandered by ten minutes before, its horse’s hollow hoofbeats echoing between the buildings. The gas street-lamps were long since lit, but between them were patches of deep darkness, patches entirely too broad for comfort in these circumstances. Beneath the brim of his silk top hat, eagle-sharp grey eyes darted about, studying the shadows, alert and aware. For well this man knew that danger lurked in the gloom this night, danger peculiar to him alone; and he was alone. So very alone.

But not for long. He was headed to a specific destination. To the one man he knew he could trust, the one man who would stand at his side regardless of danger—for had he not done so, many times before? Was not this the reason for the deep, if largely unspoken, bond of friendship between them?

His friend would help. There was no doubt in his mind on that point. Already today two attempts had been made upon his life, and well did this man need help.

The words died on said lips.

A hulking, brutish shadow materialised from the alleyway in front of him. The elegant man in the top hat ducked just in time to avoid the lead-weighted bludgeon that swung through the space his head had occupied fractions of a second before. Instead, the silk hat took the brunt of the blow, flying across the sidewalk and into a puddle in the gutter, its side crushed. Flinging up his cane and grasping each end in his hands, the gentleman dropped into an Oriental horse stance, and prepared to do battle.

"You can try," the gentleman replied, calm. "But better men than you have tried, and here I stand."

A guttural, angry sound emerged from the assailant, and the cudgel swung again, this time with enough force to crush bone. Deft, the gentleman caught it with the center of his cane, but to his chagrin the walking-stick, his weapon of choice in many a similar street altercation, chose that moment to give up the ghost. It snapped in two, splintering and cracking. He snarled his own irritation, and flung the pieces aside when he realised there was not enough left to use as a decent weapon.

Then he began to flit and weave as the other man smirked and lunged at him, swinging the club repeatedly, as hard as he could. It was a dance of death, and one wrong move by the gentleman would have serious, possibly fatal, consequences.

But the man in the evening dress was not without weapons; no, his best weapons were permanently attached to his person. The alert grey eyes watched, looking for some opening; and when he saw his chance, he struck like lightning. A fist shot out at the loutish face, catching the hit man squarely in the mouth just as he realised his danger and started to shout for help. All that came out was a grunt, however, and the assassin fell to the pavement as if pole-axed, with both lips split.

The gentleman hissed in pain, grabbing his fist with his other hand for a moment to let the worst of the discomfort pass before examining the damage.

"By Jove, he has sharp teeth for such a troglodyte," he murmured, peeling off the ruined black kid glove to expose the bloody knuckles beneath. "Completely through the leather and into the flesh. I shall have to have this disinfected, for certain. No time for that now. Go, man!" He turned swiftly to resume his journey.

A crack resounded from the brownstone close at hand, and the man felt a spray of stone chips strike the side of his face. He flinched, and a sharp curse left his lips. He took to his heels and rounded the corner of the street, then disappeared into shadow.

Not ten feet away from the gentleman, though invisible to him, an elegant blonde woman in a white lab coat stood between tall, electronic towers. Behind her, concentric rows of computer consoles were manned by two dozen scientists, engineers, and technicians. Surrounding all of them was a huge, domed room carved from solid pink granite.

Finally one of the technicians broke the electronic silence.

"What do you think, Jim? How were the readings?" The woman turned toward him.

"I’ve got bang-on, Dr. Chadwick," Jim noted, glancing down at his own console, brown eyes darting about as he surveyed his readouts. "But I can’t say for everybody else."

"Rock steady at Timelines," someone else called.

On it went, from console to console. Finally the woman nodded.

"Perfect," she purred in deep satisfaction. "We’ve got our subject. Page Dr. Hughes and have her come down."

"On it, Doc," Jim grinned, reaching for the phone.

For more, or to purchase this and more books in the series, go to my website, www.stephanie-osborn.com.
Posted by Stephanie Osborn at 1:00 AM No comments: Links to this post