Excerpt - The Case of the Cosmological Killer: Endings and Beginnings

Now we come to book 4 of the Displaced Detective series, The Case of the Cosmological Killer: Endings and Beginnings! Enjoy a sneak peek inside! 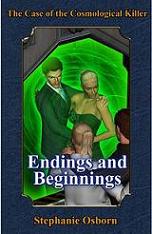 “Good day to you both,” he said into the air without raising his head. “How are matters progressing?”

“We have hopes,” his own voice came back to him. “The experiment devised by the firm of Chadwick & Chadwick, Limited, looks to prove successful.” Holmes’ voice was tinged with humor. “Or perhaps I should say, Chadwick & Chadwick-Holmes, Limited.”

“I am glad to hear it,” Sherlock said softly.

“Speaking of Skye, where is she?” Chadwick wondered. “I wanted to give her the experimental setup and double-check for updates. We told her we’d come back at this time.”

“Oh, I am sorry. I am afraid she did not mention that,” Sherlock raised his head and shot a regretful but firm glance in the direction of the voices, knowing that the other Holmes would read his thought in his expression. “She is in bed, soundly asleep. She worked most of the night and barely ate at all today. I finally convinced her to take tea with me, and then discovered she was too inflexible to even stand upright. She permitted me to manipulate her musculature sufficient to release the kinks, but by the time I had done so, she was in a deep sleep. She is nigh exhausted.”


* * *
“Damn,” Chadwick breathed.
“He has a point, Chadwick,” Holmes observed quietly, referring to the refusal to awaken Skye he had noted in the other man’s face. “It does us
no good if she exhausts herself on our behalf, and falls short of the mark when her body and mind cannot take any more.”
“I know,” Chadwick agreed. “That’s what I meant, not, ‘damn, she didn’t get the work done.’ She’s me, remember? And she’s pushing herself as hard as I do.”
“It appears so,” Holmes agreed. “And that is saying quite a bit.”

“It is,” Sherlock admitted.

“Can you make anything of it?” Holmes wondered.

“I can,” Sherlock confirmed. “And it looks good, insofar as it goes. But it is incomplete. And as I have not been in this continuum as long as you have been in yours, I do not have sufficient knowledge of the science as yet to consider even attempting to complete it for her.”

“You are the expert here, Chadwick,” Holmes admitted somewhat grudgingly. “What do you wish to do?”

“Dial back in around noon tomorrow,” Sherlock advised. “It will not delay your experiment overmuch; for you, it is a matter of minutes. And this will give Skye time to ‘catch up’ her sleep—she has slept scarcely more than ten or twelve hours total in some three days—and I will see to it that she eats properly whenever she awakens. Then she will have the morning to complete her calculations here,” he waved the notebook at them, “and she can give them to you at noon, then eat lunch.”

“Ha! I know what you are doing,” Holmes discerned with amusement. “Just as I—just as we—once managed Watson’s finances to ensure he did not come to ruin, you are taking control of her schedule to ensure she obtains adequate rest and nourishment. I have been known to do that once or twice with Chadwick, here.”
“And, I would suspect,” Sherlock retorted with the faintest hint of a smile, “she has likely done the same with you, on more than one occasion.”
“She has,” Holmes admitted, and this time Sherlock did not hear begrudging in the other man’s tone. “We four can become amazingly single-minded when need drives us.”
“Indeed,” Sherlock nodded.
There was a brief silence, and Sherlock could picture Chadwick gazing at Holmes with a sort of grateful, wistful expression.
Open your eyes, man, and see the treasure you have in front of you, before it is too late, he thought with some vehemence.

Eventually Chadwick spoke again, and this time there was a soft smile in her voice.
“That sounds like a plan, Mr. Holmes, and we’ll follow it. Tell Skye we’ll see her at noon tomorrow. Meanwhile, you take good care of her, okay?”
“As much as in me lies,” Sherlock nodded.
“Which is considerable,” Chadwick chuckled.
The air crackled, another surge of ozone wafted through the room, and they were gone.
~~~
If you enjoyed it, or if you've been reading the previous books in the series, you can buy Endings and Beginnings here!
-Stephanie Osborn
http://www.stephanie-osborn.com
Posted by Stephanie Osborn at 3:30 AM No comments: Links to this post